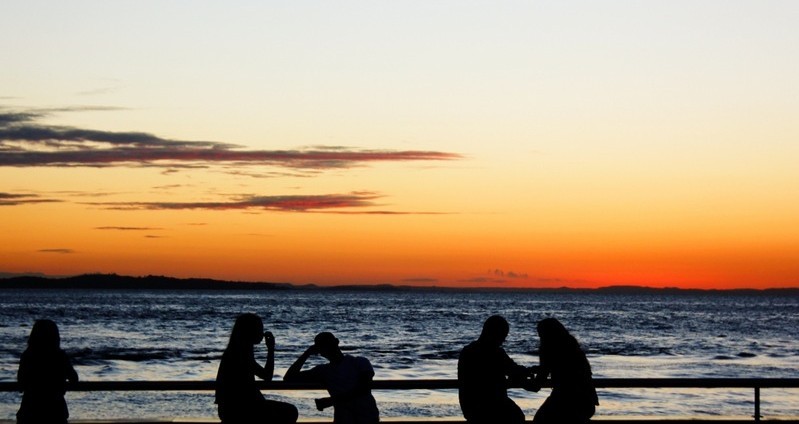 My friend the world traveler Ashlie told me in Greece, “You seen one sunset, you’ve seen them all” as she fell asleep on the loveliest of ones in Santorini.  I dunno… I think I disagree Ash. 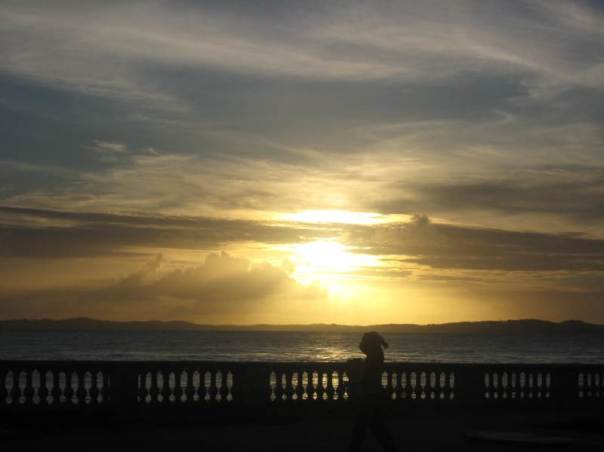 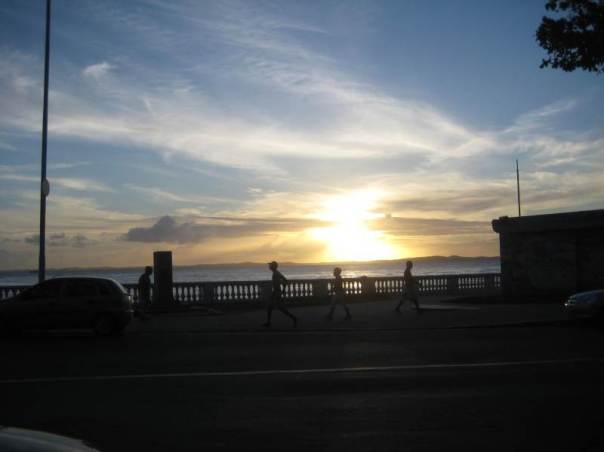 My name is Melissa, and yes I can afford to eat at the same restaurant as you. Boa Noite.

Tonight I met up with a virtual friend who I had been introduced to a few months ago (via facebook/email) by another friend who insisted we meet due to our similar interests in health in Brazil.  Ugo will be in Salvador for a year and a half working on maternal and child health issues for her dissertation–the hottness!  She has been training in capoeira for the last 9 years.  In Brazil, she trains at the fundacao internacional capoeira angola.

My guardian angel-Ana Luisia (who by the way was so smart that she took all of housing folks information in her cell-which came in handy since I locked myself out of the apt today (Eu sou estupido; but I digress) hand delivered me the capoeira studio where I thought I’d see a demonstration, but instead was treated (about a 1/4 mile down the road) to a formal presentation about capoeira and then treats and THEN a demonstration.  It was fun…and I finally got to meet Ugo (thanks Karie)!

Capoeira was created in Brazil mainly by descendants of African slaves with Brazilian native influences.   Music is integral to Capoeira. It sets the tempo and style of game that is to be played within the roda (see Wiki page here for more info). The music is composed of instruments and song. Rhythm, controlled by a berimbau, differ from very slow to very fast, depending on the style of the roda. 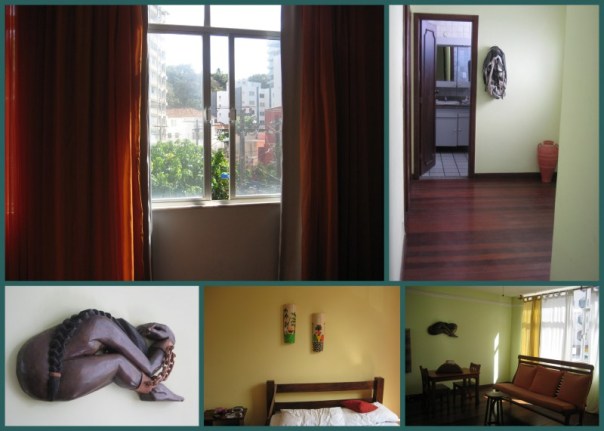 I am renting a spacious condo in Barra, Salvador-a few minutes from the beach.  There are lots of food options and it seems safe enough.  I visit the historic center ths weekend and hopefully get in good beach time.  I’m also having lots of meetings and giving a talk to the Public Health Institute on Tuesday at the federal university.  Here until Wednesday.

You know how sometimes you get confirmation that you are where you are supposed to be? I’m having one of these moments. I have had a (relatively) rough Spring. God always shakes things up when you think you know how life is going to go, but He always knows better than you do. I have no idea what the future holds, but I do know that I had a 2.5 hour conversation with the Director of Sickle Cell Programs for the Ministry of Health of Brazil this evening and know that I’m exactly where I’m supposed to be. We talked about what’s happening in our respective countries, my research ideas, my work…she said she was expecting someone a lot older. I’m just getting started baby! I travel to Salvador in 4 days where I will speak to professionals and patients about my experience as a patient as well as SCD in general from a US perspective. I already know that meeting people living with the disease-as always-will be a life altering moment for me.

This evening, Joice was so gracious and kind and supportive. She’s interested in what I do as a student and as a scientist and has offered to fly me back out in October for a meeting. She also wants me to spend more time in Rio exclusively with the program here and we are throwing out December as a potential for another return. It seems cheesy-but I definitely feel a connection to Brazil. There is a reasosn for it all and after I master the language–watch out!

(if only I could have written that without the help of Google Translate).

I am reposting an archived blog from Fly Brother that gets to exactly what I’ve been feeling in only 2 weeks in Brazil. It has been fascinating observing and being observed. I still haven’t broken down the “Here, you’re as black as your hair” comment I got week 1 — still wrapping my mind around all that I have to say.

Anyway this is a really good read:

On Saturday (after my epic Friday night-6:30AM folks!) I made plans with new friends I met that night and a classmate to go back to the scene of the crime (lapa) in the daytime for some proper pictures-then onto Santa Theresa (a neighborhood by the center of Rio and the only sanctioned hillside neighborhood/favela).

I’m going to blame the carefree spirit of being an undergrad as to why these plans never fully took shape.  I ended up traveling to the center of town by myself to meet with another friend who was already traveling there due to crossed communication (we were supposed to meet at the station).  Well-I thought I was supposed to get off at one stop (Cineladia), but that stop doesn’t have service on the weekend, so I got off on the next one (Carioca)…

I called the friend already in Santa Theresa and she tried to instruct me on how to get there from where I was.  I asked folks in the best Portuguese I could muster and eventually found my way to the vicinity of the tram that would take me to Santa Theresa.  When I got there, I inquired about the specifics of the tram and was told by 3 brasileiros that there were too many people and would take too long, but I could ride with them in a cab there.  I agreed and we were on our way.  Me and my new brazilian friends (Maria Rita, Heluisa, and Marcelo).

Once we made it to the hillside town, my friend called to tell me she was having chope (cold cold beer-I can’t tell you how much chope i’ve had.  its the cheapest thing you could ever buy in rio[cheaper than water!] and everywhere, everyone drinks it) waiting for me, but her phone was dying so she needed to tell me where she was now.

“I’m at …. something in Portuguese”

“Just ask someone to point you to …”  silence.  death.  cell phone death.

I sighed.  The day was going this way, so why not round it out?

My Brazilian friends asked what happened.

I spent the rest of the day with Maria Rita, Heluisa, and Marcelo.  It was awesome.  I practiced my Portuguese and they practiced English (a lot!).  We had chope, saw a free play/show, wandered the hillside, and went back into town.  They totally took care of me…and I am super grateful they were so kind.  Below are some pictures from the day.

Afterwards-after exclaiming it was too dangerous for me to be in the area we were in by myself-we rode the train and got off at our respective spots.  As if the day was not enough, I rounded out the evening by catching the most amazing samba show (back to lapa!) at Centro Cultural Carioca with a classmate…recommended to him by a renowned latin jazz percussionist that trained his brother.  Check them out:  Sururu na Roda

Adventures?  Yeah, I’m having them. 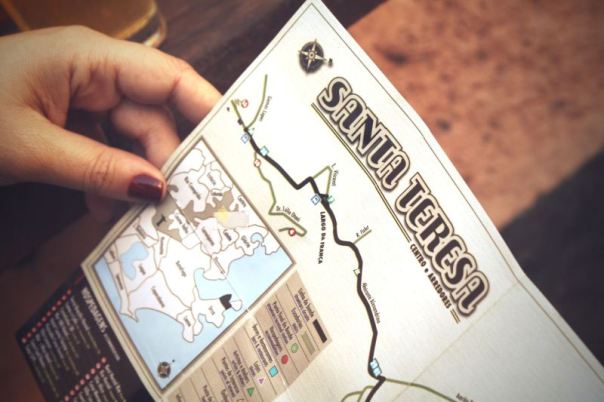 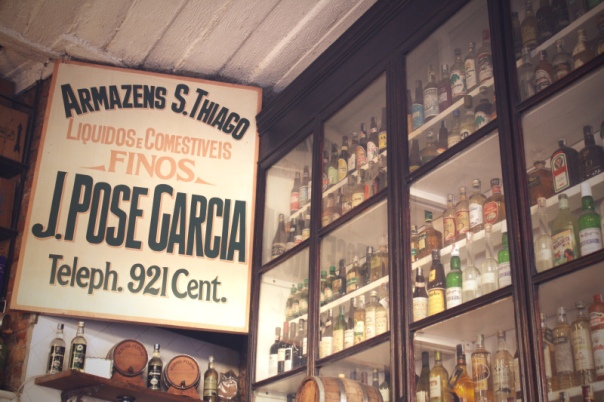 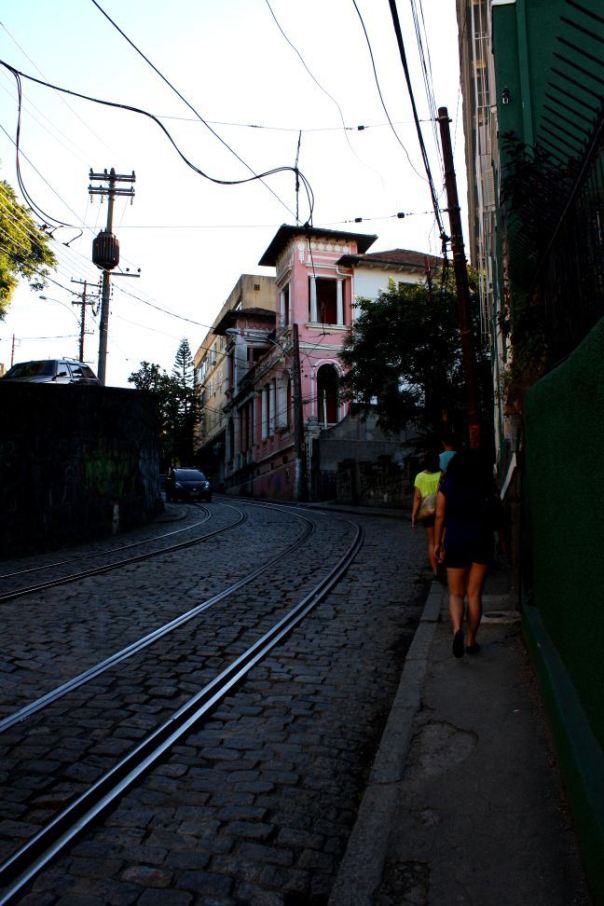 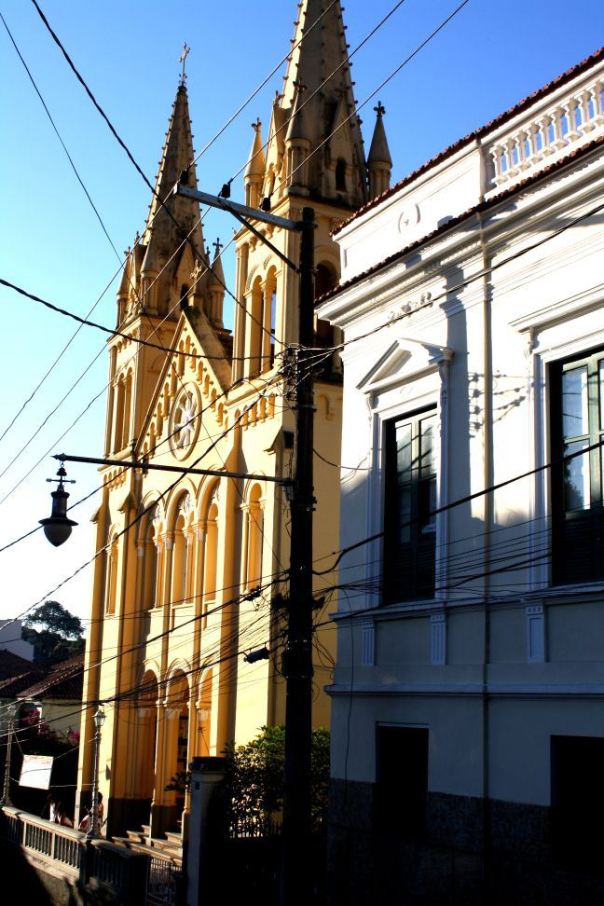 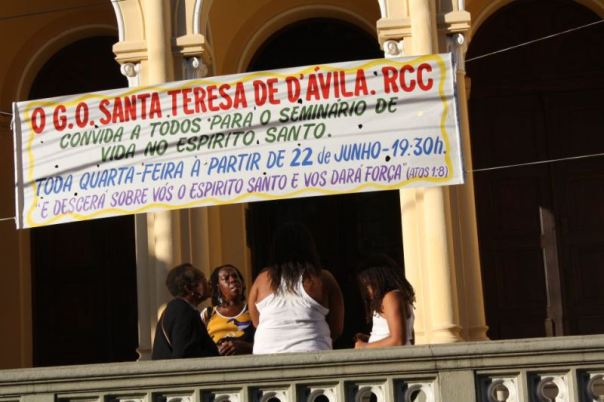 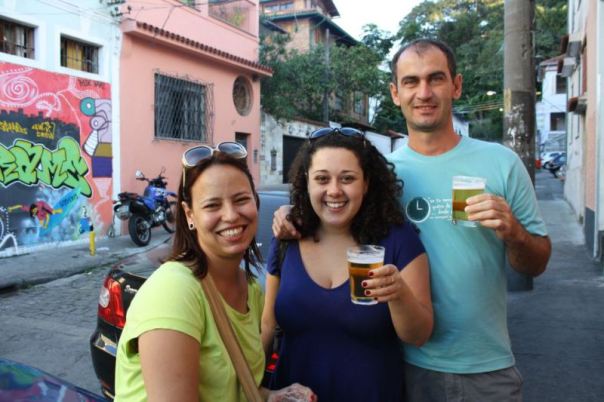 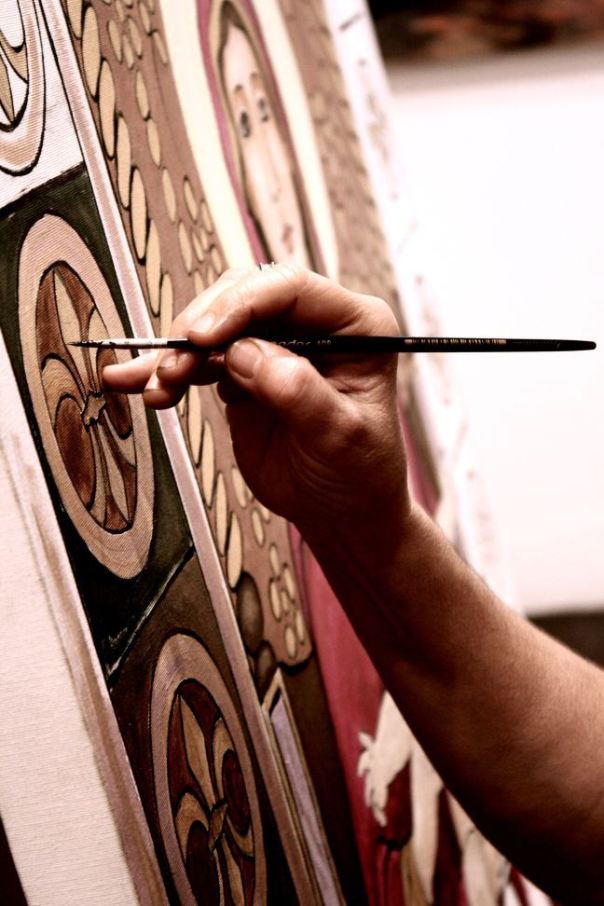 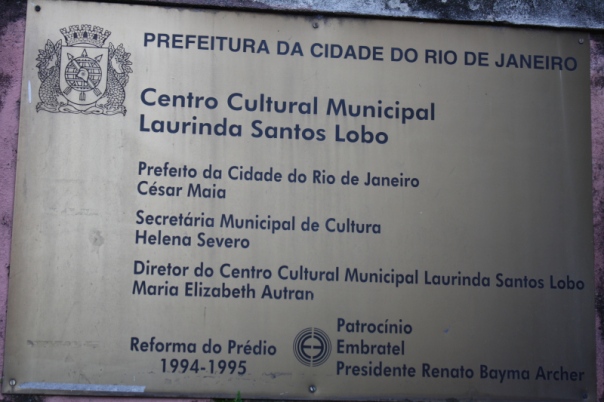 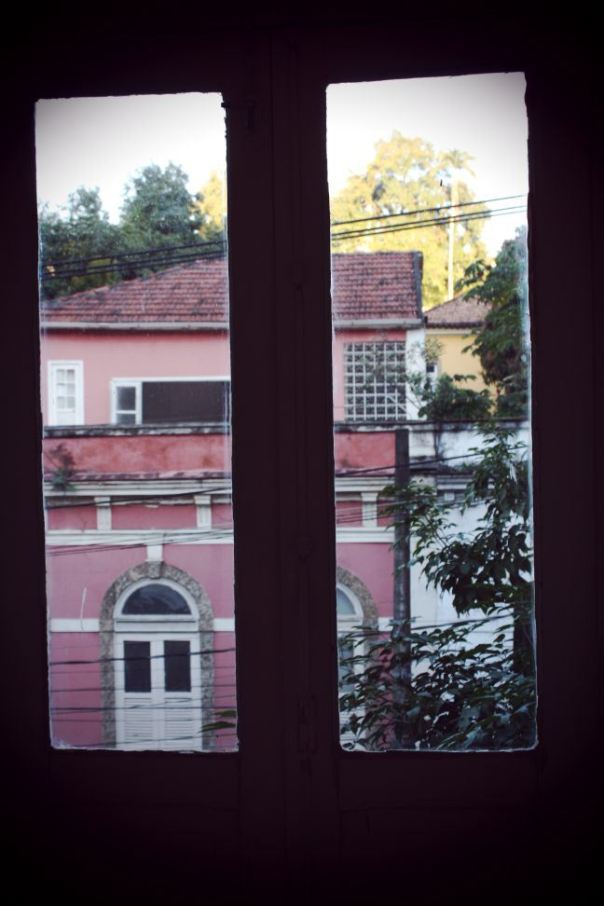 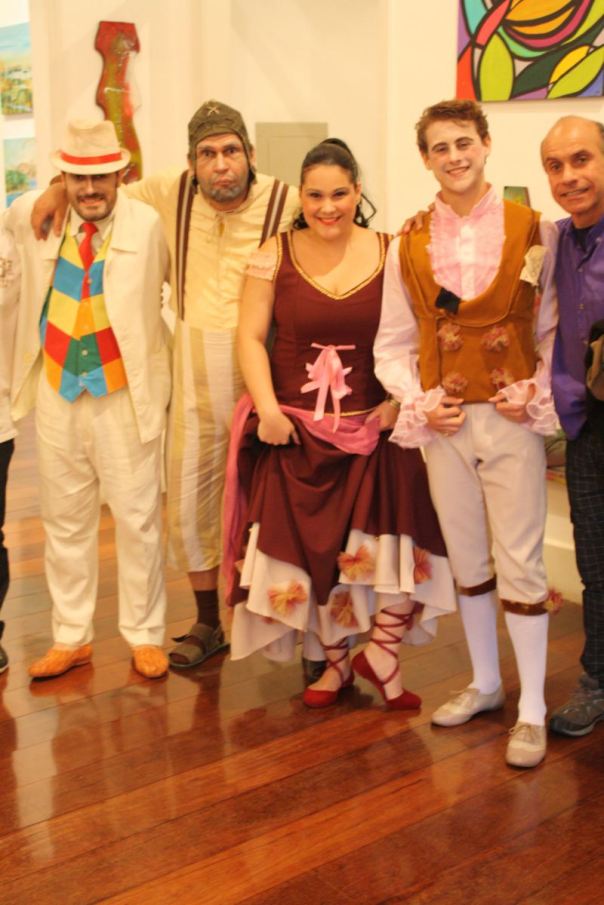 Lapa is a neighbourhood in the city of Rio de Janeiro, in Brazil. It is located in the centre of Rio and is famous for its historical monuments and nightlife.

The neighbourhood is home to the Arcos da Lapa, an impressive aqueduct constructed in the mid-18th century by colonial authorities. Another important historical attraction is the Passeio Público, the first public park of the city, built in the 1780s.

Since the early 1950s, Lapa has been known for its lively cultural life, concentrating many restaurants and bars where Brazilian artists and intellectuals used to meet. It was, and still is, famous for its many restaurants, bars and clubs where the various forms of Brazilian music can be appreciated, like the Asa Branca bar and the Fundição Progresso. The Sala Cecília Meirelles, an important venue for chamber music, is also located in Lapa.

This was my first venture outside of the bairros of Zona Sul.  Andy and David (friends from Emory) are in town for 5 weeks an got in tonight.  We met in Copa for dinner and drinks (passionfruit caipirhinas -sigh) with some of the grad students in the program and then against my better judgement (it was a school night!) I went with them to LAPA.  I am so glad I did!

We had awesome seats, heard amazing music (classic samba) by [EDIT] Toninho Geraes at Carioca da Gema (CLICK IT!), and I met a samba singer, Thais Macedo, who had amazing hair and who offered samba lessons for english lessons.  Score!  I obviously have heard samba before, but my iTunes had nothing compared to the live experience I just had.  AMAZING.  You should have seen the crowd.

Here I saw for the first time the notion of Brazil having no race and also here for the first time I spied all the fine a$$ men everyone was talking about!  Sweet Lord they are beautiful (SMH and fanning myself)!  OK-I get it.  Samba, sweat, and sexiness–yep.

I had an awesome night…thanks Andy and David!! 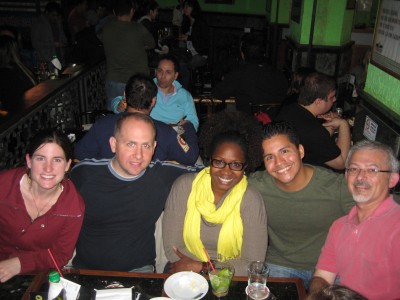 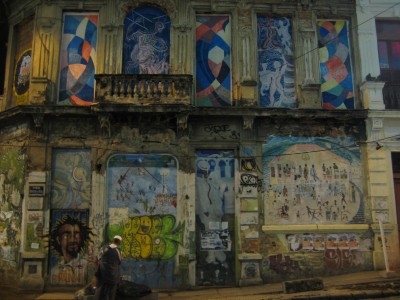 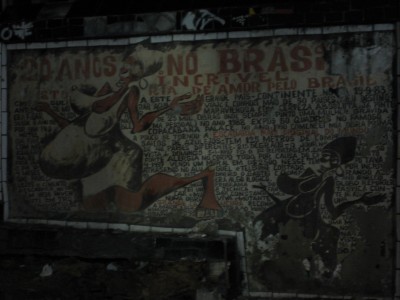 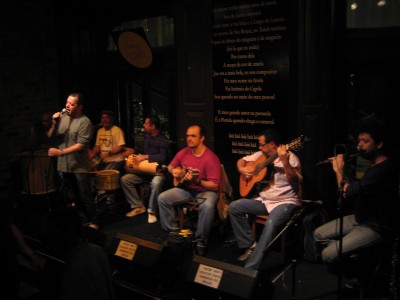 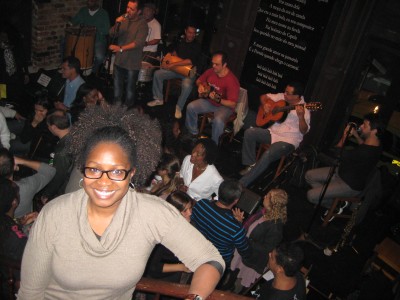 I thought of my friend and classmate Andy Ditzler when I went to a talk today after class.  I had no idea what was being said, but there was lovely bossa nova music involved.  He’s coming to Rio this week and I’m sure we’ll do something music oriented!

OK-I just googled who was giving the talk and playing guitar and he’s a pretty big deal!

Here’s a snippet that I recorded:

He’s singing the song Voce (You).  Here’s a full version:

…this is what the program coordinator said today in orientation-directed to the women only.  “Brazilian girls know how to do this well and to stop things before they get out of hand.  In our culture it is a game and sometimes no means yes.  Pay attention to this.  Be careful.” 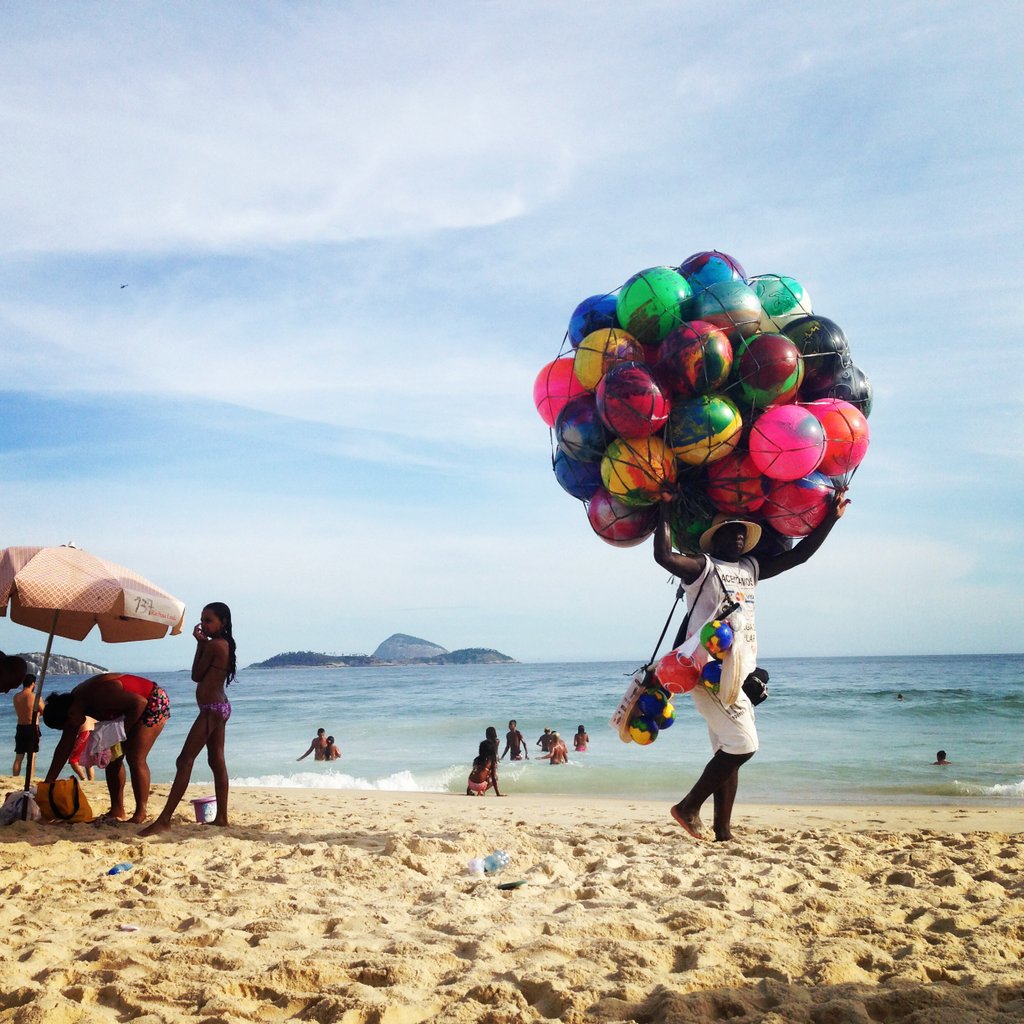